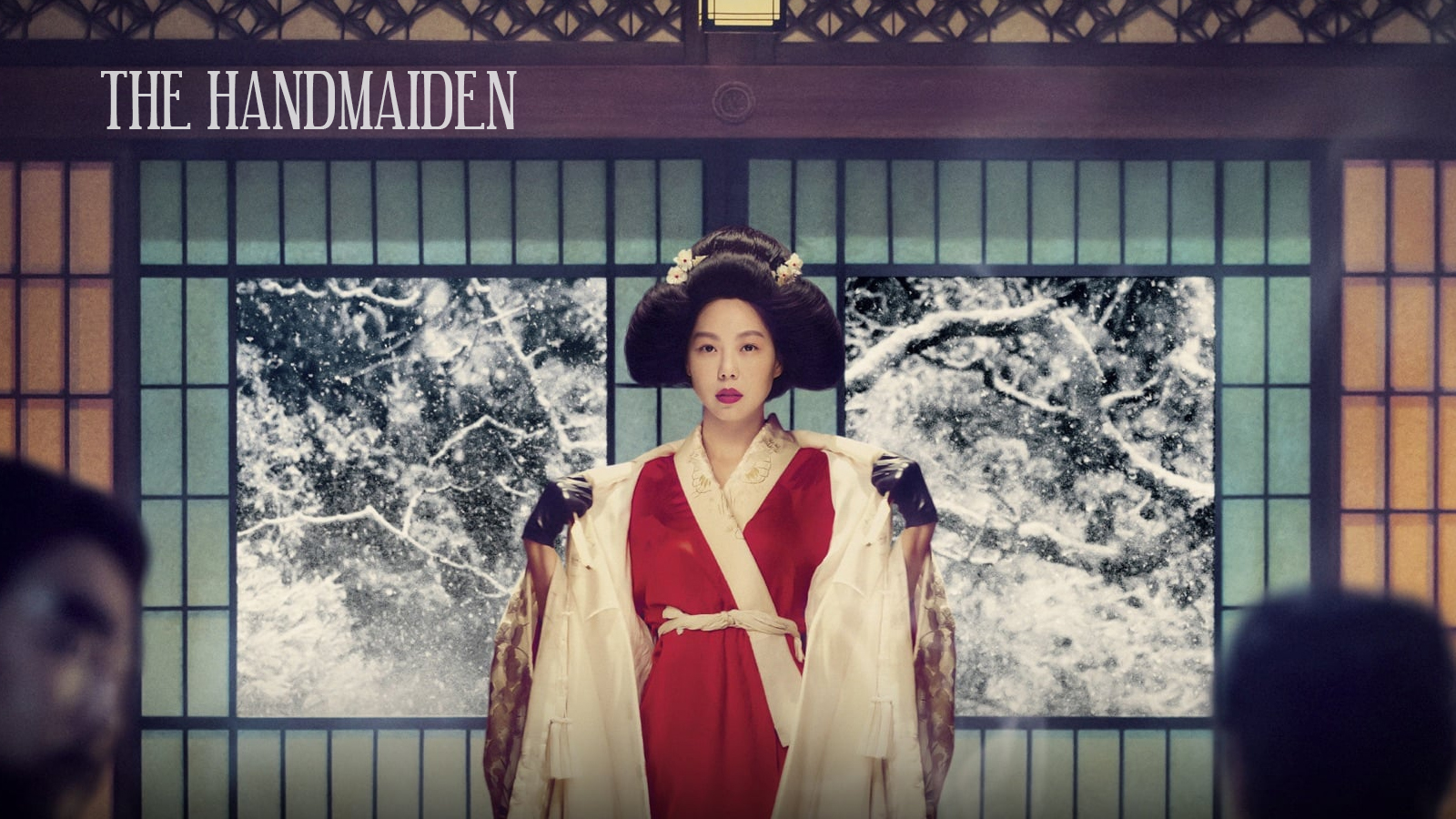 THE MADHOUSE OF THE HANDMAIDEN

Most of the films that are visually stunning like PARK CHAN-WOOK’S THE HANDMAIDEN (2016.) are not inexpensive to produce, so it is an extraordinary feat to have made this incredible looking film for just nine million dollars. The Korean film is the adaptation of Fingermith, a British novel by the writer Sarah Waters. Park Chan-Wook

‘chose this story because the two women at the center felt so alive. One is a person with a dark past, and one is a person living in a desperate present, but both exude a very strong sense of individuality and charm.‘ (Chan-Wook, 2016)

Fingersmith (2002.) is a Victorian novel, but that didn’t work for Park Chan-Wook, so he changed the time period, because

‘looking at the history of Korea, it had to take place in a time when the class system remained but at the same time there had to be asylums for the story to work. And really the only time when those two things existed was in the early 20th century.‘ (Brown, 2016)

Asylums are an important part of the film’s fabric, but how do the location and theme affect the story and the characters in the film?

THE SIGNIFICANCE OF THE LIBRARY

Park Chan-Wook’s films were always exploring the themes of incarceration, confinement, a physical prison as well as a mental one in which his main characters have to survive and hopefully find an escape.

‘This theme is yet again explored as much through architecture as through plot. Here, architecture is an established, inescapable character and plot device.’ (Roth, 2017; 213)

Many films treat their filming locations like a character inside the story. The way they are introduced, framed and presented throughout the film, indirectly tells a lot about the main character. It represents the character’s interior world which is manifested outside the character so that audiences try to understand what fuels their behaviour.

In The Handmaiden, the space the characters occupy reveals a lot of hidden details about the characters. Park Chan-Wook pointed out how

‘the house is an important space […] The most important space in terms of production design is the library. The exterior is traditional Japanese architecture, and inside there is a Western-style library. (Chan-Wook, 2016)

This clash of cultures is mirroring the conflicts the main characters have to endure. Their difference in class and behaviour is crucial for the story and in the end, the film shows that these things are only superficial facades and how necessary it is to overcome them. The maid Sasaki (KIM HAE-SOOK) explained

‘A western-style wing designed by an English architect and a Japanese wing from the main house. Not even in Japan is there a building combining the two styles. It reflects Master’s admiration for Japan and England. Next is the annex which Master had furnished as a library.’ (Chan-Wook, 2016)

An ANNEX is an architectural term and according to vocabulary.com, it means an extension of or an addition to a building. By looking at the floorplan of the library, it becomes apparent that this addition serves as a connection between the two wings. The floorplan looks like this:

That floorplan looks awfully lot like a floorplan belonging to a western church:

Why would the construction resemble a church if the film is taking place in Korea, with one wing of the mansion being decorated in Japanese-style and the other wing in English-style architecture?

‘a Japanese garden with white pebbles, stones and water. Japanese gardens are meant to reproduce the world in miniature – mountains and rivers, lakes and forests – so Kouzuki’s act of moving it inside is akin to creating a new world inside his own kingdom.’ (Chan-Wook, 2016)

In the first part of the film, there is barely a scene dedicated to the library. It is a mysterious place, one that Sookee (KIM TAE-RI) only reluctantly steps into. As soon as she enters through the ominous red door, panic ensues and the uncle screams

In the library, there is not much to see, a long corridor that leads to the center of the room, the floor covered with tatami mats.

The corridor displays eight rows filled with books. There is nothing except two desks in the middle of the room; the bigger desk belongs to the uncle and the smaller one to Hideko (KIM MIN-HEE). The uncle writes in his workbook, and Hikedo’s desk displays a book on a stand. although there is a gate in the back of the library, the front walls are covered with a pattern that is resembling prison bars. The library is a prison for Hideko, but for the uncle as well.

The library is more prominent in the second segment because it is a flashback and the audience gets to see where and how Hideko grew up. Devoid of any comfort or warm colours, the room is emotionless and should never be seen as a part of the house. It is an entity in itself. The library remains Hideko’s main occupation, day in and day out. She is forced to use it as a study hall, the dining room and as a working place. Most of the time the room is empty, with nothing but just the two desks, but when an official reading takes place, details are brought inside the room to enrich the experience.

Although these little design interventions lift up the room and give it some atmosphere, it doesn’t manage to turn this place into a comfortable space, because the room is supposed to:

‘the steps leading down to the room from the library’s hallway function as seats for the guests.’ (Roth, 2017; 226)

It is obvious that they try to find the best pose to make it bearable to sit through a longer period. This tells a lot about the uncle as well since he has no consideration for his clients, their well-being, or their desires. He just thinks about himself and how to bring a business deal to an end. Everything else is just noise.

When Hideko is reading to the wealthy men, she is completely surrounded by the prison pattern, but she makes the best of the situation, by disappearing into the words she is reading. The attention that every single man is giving to her is of little comfort as she is descending into the depths of her own imagination. It is the only way to make her abused existence bearable. Each man, on the other hand, visualizes every single word she is reading to them with them as the main character inside that fantasy. Because of their behaviour, Hideko assumes that all

On the left side of the room just under the drawing of a web on the wall, one of the mats can be removed to reveal a secret door that leads to the basement under the library. Just like there is a hidden secret room under the library, there is a secret hidden behind the uncle’s ears. He is responsible for the killing of the aunt because she wanted to run away. Frightened, and ashamed, the five-year-old Hideko accepted everything the uncle asked of her. Not until Sookee arrived, have the things changed for the better. At first, she is sceptical and tries to sabotage Sookee in everything she does, but at the same time, she feels an enormous connection to her.

THE LIBRARY AS THE MADHOUSE

The clash of the cultures wasn’t just a quirky design presented in the architecture of the mansion, no, it also meant that everyone has to behave accordingly when being in a certain wing of the estate.

‘When characters enter the Japanese-style quarters they must take their shoes off, and when they walk through the Western-style wing they must put them back on again.‘ (Chan-Wook, 2016)

This kind of requirement can provoke mad behaviour. Besides that, here are some other examples that can provoke insanity:

There are many themes that can be explored inside The Handmaiden and each can be traced back to the main theme of imprisonment. Since the film is rich in texture, multiple viewings are mandatory. Visually, every single scene can serve as a masterclass in cinematography and editing. For such a small production, it is an incredible film because it displays the energy, courage and creativity of a giant Spielberg-type blockbuster, but audiences shouldn’t forget,

There is more on The Handmaiden, head over to: